May is mental health awareness month and therefore a very meaningful month for me. My current role as the founder of WellBe, a board certified patient advocate and a speaker on the topic of wellness and a holistic approach to health, all stemmed from losing my mom to suicide in 2010 following her battle with Schizoaffective Disorder during the last few years of her life.

Though her case was complicated, one of the main things I remember about the last few months of her life was how incredibly lonely she was. Her brother, my uncle, became her legal guardian and was living in Boston for work, so she moved up there from New York City where she lived for most of her adult life. She didn’t know many people and lived alone in an apartment across from my uncle’s church. He is a priest so my mom could not live there with him.

Because of the many psychiatric drugs she was on, she felt terrible and wasn’t up for socializing often, and certainly not with new people or those who weren’t aware of her situation. She spent a lot of time alone in Boston, though my uncle did his best to spend as much time with her as he could. My brothers and I went to visit her, but all of us were in college or just entering the working world in Baltimore and New York so it wasn’t as frequent as we wish we’d visited. She began to lose hope, to give up, and assumed she would be on the debilitating drugs forever and didn’t want to live that way.

The Issues of Isolation

The former United States surgeon general Vivek Murthy wrote in 2017 that loneliness and social isolation are “associated with a reduction in life span similar to that caused by smoking 15 cigarettes a day and even greater than that associated with obesity.”

In January 2018, the New York Times reported that Britain appointed its first “minister for loneliness,” charged with tackling what Prime Minister Theresa May called the “sad reality of modern life.”

Thinking back to my mom’s experience, I can understand how the loss of connection brings a loss of hope, a questioning of purpose and too much time for the negative voices in our heads (which every one of us has!) to get too much air time, and without any other positive perspectives or people to quiet them. And it’s not just those suffering from mental illness: a 2015 study found that loneliness can alter immune system cells in a way that increases susceptibility to illness. The risk of all kinds of chronic illness increases when someone feels lonely—and it’s across all age groups. Medical News Today also reported that younger adults aged 45-49 reported higher rates of loneliness than adults aged 70 and older in a 2010 survey of more than 3000 American adults.

Because I do a lot of writing, editing and recording for my work today, I work from home at least half the week. I can tell a huge difference in how I feel when I spend too many days in a row working from home. Sometimes it’s subtle, but I now look out for it and recognize that if I’m feeling a bit blue after a few days of working from home, it’s not me or my brain, but rather the situation I’ve put myself in.

One of my favorite things to cite in my work are the five Blue Zones of longevity. One of the main commonalities of why these disparate communities around the world live so long without disease is that they all live in close knit communities. Many generations of families live together in the same house and in Okinawa, one of the five Blue Zones, people have “moais” which are social, financial, spiritual and health support groups that meet regularly.

So at this point you might be thinking: great, I live alone, I’m in a city for work where I don’t know that many people, does this mean I’m going to die of a chronic disease? No, there is much you can do to find connection. It just takes a little effort.

A Quick Exercise to Identify Ways to Connect

Grab a notepad and think about the different things that interest you and that you believe in.

Once you’ve made your list, think about the different ways to do these things in a group. Some examples include: routinely go to a yoga class (or festival like Wanderlust!) so that you get to know the teacher and your classmates. Find a church and attend community gatherings regularly so that you see the same people over and over. If you play an instrument, post on social networks and look through classifieds about band members needed, join a book club or find a dance class to attend regularly.

If you don’t have a lot of interests outside of work or work long hours, think about any work colleagues you might get along with and ask them to grab a coffee or go for a walk with you during or after work. Or if you have a group of people you like at work, consider inviting all of them to get together, a group atmosphere might be more your thing than one on one!

If you stay at home with children, consider a parent network or group in your area, or invite another parent at your kid’s school to have a playdate or while your kids are at school, ask them to go for a walk or have a meal or drink or coffee.

Find an exercise buddy —not only will it help you keep your commitment to exercise but it is a great way to quickly connect with someone during the week. I see one of my best friends from high school for a morning Pilates class every Tuesday. We only get five minutes to chat and hug afterward, but that’s five minutes more than I would normally get to see her during a busy work week! I also do everything I can to get to that class, despite my preference to work out in the evenings, just to avoid letting her down and for a chance to see her.

Written in Our DNA

The reason that connecting with people who have a shared interest is so powerful (rather than just people who have been in your life a long time) is that you’re combining the positivity of something you enjoy or feel a benefit from with the positive biological experience of being with others, or even better, touching others when you say hello and goodbye. Did you know that hugging reduces blood pressure and the risk of catching a cold? As humans, we are hardwired for connection, and in this age of wifi everywhere, smartphones and endless articles, shows, movies, games and social media to consume, it’s easy to avoid it. However, we now know it can be a matter of health or illness, or even life or death. 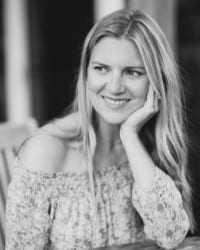 Adrienne Nolan-Smith is a board certified patient advocate, speaker and the founder of WellBe, a media company and lifestyle brand focused on bridging the large gap between the healthcare system and the wellness movement to help people prevent and reverse chronic health issues naturally. She received her BA from Johns Hopkins University and her MBA from the Kellogg School at Northwestern University. She lives with her husband in New York City. You can follow her for daily inspiration and information @getwellbe